Say hello to this Chicken Jalfrezi recipe – it’s been in the works since a whooping 2015. You could say it’s likely one of my longest projects to date – it’s officially six years old and only making it’s debut on the blog now!

The reason why it’s taken this recipe so darn long to see the light of day is this – my husband does not like capsicum. And therefore, it just never ended up on our meal rotation, like, ever. So whilst this recipe has been in the works for six years, I probably only cooked it six times during that duration.

I finally gave it a hand whilst I was staying at my Mother’s house a while back and I finally cracked the code and got something I am finally happy sharing with you all. Hurrah for the Chicken Jalfrezi recipe finally graduating from my drafts folder!

How do I know this Chicken Jalfrezi is legit? I’ll tell you why.

I’m actually incredibly proud to say this recipe really blew my family away. You’d think this isn’t such a rare occurrence, because ya know I’m a food blogger and all. But actually, my family ain’t so easy to please, #thestruggleisreal. A while back my parents came to visit me and I made this without rally giving it much thought and I was truly humbled and overjoyed at how much they loved this! It definitely solidified my confidence in this recipe and makes me even more happier to have it up here on the blog for you all to enjoy too! What is Chicken Jalfrezi?

Chicken Jalfrezi is a boneless chicken curry made with a traditional onion and tomato masala. It is characterised by the inclusion of large, cubes pieces of capsicum (bell pepper) added in towards the end of the cook-time, so they keep their colour and bite. Some versions of Chicken Jalfrezi also add large pieces of onion, but my recipe doesn’t.

What sets a Chicken Jalfrezi apart from other regular curries is the slightly tangy addition of vinegar at the end, which makes it rather reminiscent of more Indo-Chinese style curries such as Chicken Manchurian.

So truthfully, this isn’t something I’ve grown up eating. Neither has my husband.

It is however, served at many of our local Pakistani and Indian restaurants without fail.  And indeed, this is a very popular dish on the British takeout scene. And it’s popular for a good reason, it’s an absolutely delicious curry. – I, for one, adore the aroma and flavour of crunchy capsicum in not just this curry but also others such as Chilli Paneer.

The use of capsicum, which is another low calorie and low carbohydrate vegetable, bulks up the curry to make it even more filling, nutritious and satisfying.

So in essence, it certainly is a lot healthier and lower calorie than various other curries such as a butter chicken or chicken tikka masala. I suppose that’s a good bonus, eh? It’s also dairy-free too, so if that’s a dietary concern for you, you’re in luck.

To make this curry even healthier, reduce the amount of oil specified in the instructions.

Chicken Jalfrezi also wins a lot of points in the low carb area too. It probably wouldn’t be keto-friendly due to the to the onion and tomatoes, but it’s definitely low carb for sure. 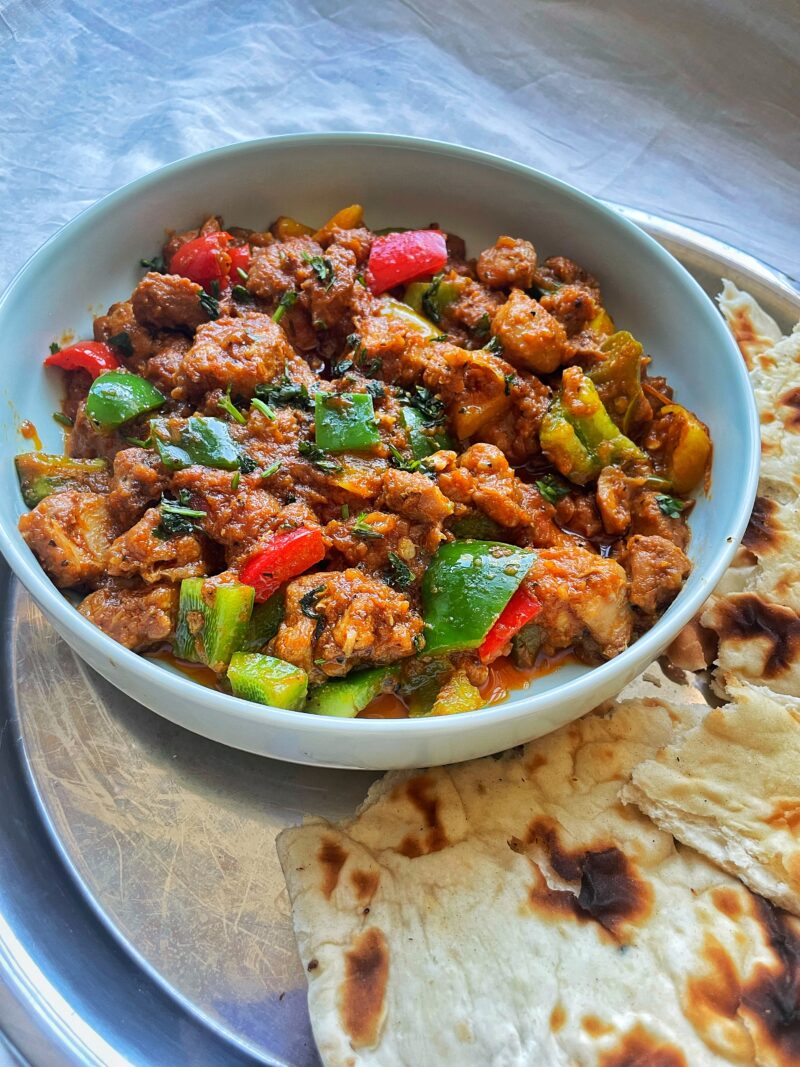 How to make Chicken Jalfrezi

Chicken Jalfrezi starts off very much like most other curries – we start by frying an onion. Stir it regularly to ensure it doesn’t burn or brown unevenly. Keep the head medium to high, adjusting as needed.

Once the onion is beginning to turn golden, we’ll add some ginger, garlic and green chillies.

After a few minutes, we’ll add in some tomatoes. We’ll cook this down well, into a jammy and well-integrated mixture, until the water dries out, the mixture becomes concentrated and the oil begins to separate along the edges.

Once we get to the elusive point of oil-separation (the seasoned desi cooks amongst us will KNOW how important this is), we’ll add in the chicken and spices. I’ll talk more about what kind of chicken works best for Jalfrezi in the next part. We want to sauté the chicken and spices over a high heat in the masala until the chicken no longer remains pink.

Add some water, cover and then simmer on low for 20 or so minutes, so the chicken cooks through.

Once the chicken is done, add in the capsicum and vinegar. Stir through, then cover again and cook for an additional 5-10 minutes. The aim here is for the capsicum to still retain it’s crunch, but still take on some of the flavours of the curry and also release some of it’s own.

Finish by garnishing with some fresh coriander.

Using the best ingredients to make this curry shine

How can you serve Chicken Jalfrezi?

The sky is the limit! Honestly, this is my FAVOURITE part about this curry. It’s so versatile! You can eat it with rice, or any kind of bread such as my Roghni Naan or roti. Poppadum’s work a treat too on the side. You can enjoy it without any carby companions too – just grab a fork and this is a great meal to enjoy too, thanks to the boneless chicken! It goes great served alongside a cooling salad and raita (yogurt sauce).

Can I freeze this?

Absolutely! In fact, I think Chicken Jalfrezi is a curry that freezes exceptionally well in comparison to other curries. If you can, I would recommend you freeze this without the capsicums though… this is because the capsicums can become soggy and release a lot of moisture upon defrosting. Ideally, freeze just the chicken curry and then when you’ve defrosted it, add in the capsicum and give it a quick simmer before serving. It tastes brilliant, almost like fresh, this way!

If you enjoy Chicken Jalfrezi, you may also like these recipes…

Did you make this recipe?

[…] onion. I’ve also seen variations use large chunks of red onion and capsicum much like a Chicken Jalfrezi. Modern day conveniences such as tinned tomatoes and pre-packaged jars of ginger and garlic are […]

[…] are popular on the British Indian takeout scene – you’ll often hear this name alongside Jalfrezis, Karahis and […]