Dishes such as Saag Paneer may not be something that conjures up memories of childhood lunches, comforting family dinners, dawats and the such if you’re Pakistani.

Paneer happened to be something that never made an appearance in our kitchen growing up. You see, it’s used commonly in India but not so much in Pakistan. In fact, I recall the first time ever trying it properly to be on my Walima, in the form of a delicious Chilli Paneer. And since then, I’ve been hooked.

Having said that, Paneer isn’t something that grows on everyone. It’s a saltless cheese that doesn’t go ooey-gooey like traditional cheeses. When heated, it becomes soft and more-ish, but again it’s a taste that doesn’t grow on everyone. My husband is one of those people – he will always skip the Paneer dish where he can. When it’s cooked for a get-together or served at a wedding, I will always hear someone saying ‘Paneer doesn’t taste of ANYTHING!’

But if you are one of those people who do enjoy Paneer, then rejoice! This Saag Paneer will be RIGHT up your alley!

It’s delicious, quick and very easy therefore ideal for those who haven’t got the time, patience or expertise for something elaborate!

What is Saag Paneer?

Saag Paneer is a hearty and wholesome Punjabi dish – more popular in the North Indian region than in Pakistan.

It’s a dish made using Paneer, a kind of cheese similar to halloumi, and leafy greens, usually spinach. It’s spiced with a small selection of spices, nothing too hot and is generally served with some cream or butter.

Traditionally, Saag Paneer was cooked using mustard leaves (called sarson ka saag in Hindi/Urdu). It’s thought that spinach began to be used in this dish more commonly when this dish was brought over to the Western world due to the easier availability of spinach over mustard leaves. You can cook it with a variety of leafy greens not just limited to mustard greens including spinach, fenugreek, spring greens, swiss chard, arugula… anything!

A picture of the tinned mustard leaves I use, for reference. You can get them at most Asian stores and large mainstream supermarkets in the UK

And indeed, Saag Paneer is a pretty popular curry on the British Indian takeaway scene, alongside other favourites such as Chicken Korma, Chicken Dopiaza, Chicken Karahi, Peshwari Naan etc. Most recipes call for spinach still, despite the easier availability of mustard leaves today in the form of very convenient and well thought-out pureed pre-cooked tins. I personally use a mix of the tinned mustard leaves, spinach and spring greens depending on what’s available to me at the time.

It’s vegetarian, gluten-free and can also be low-carb and diabetic friendly if consumed on its own a low-carb accompaniment. 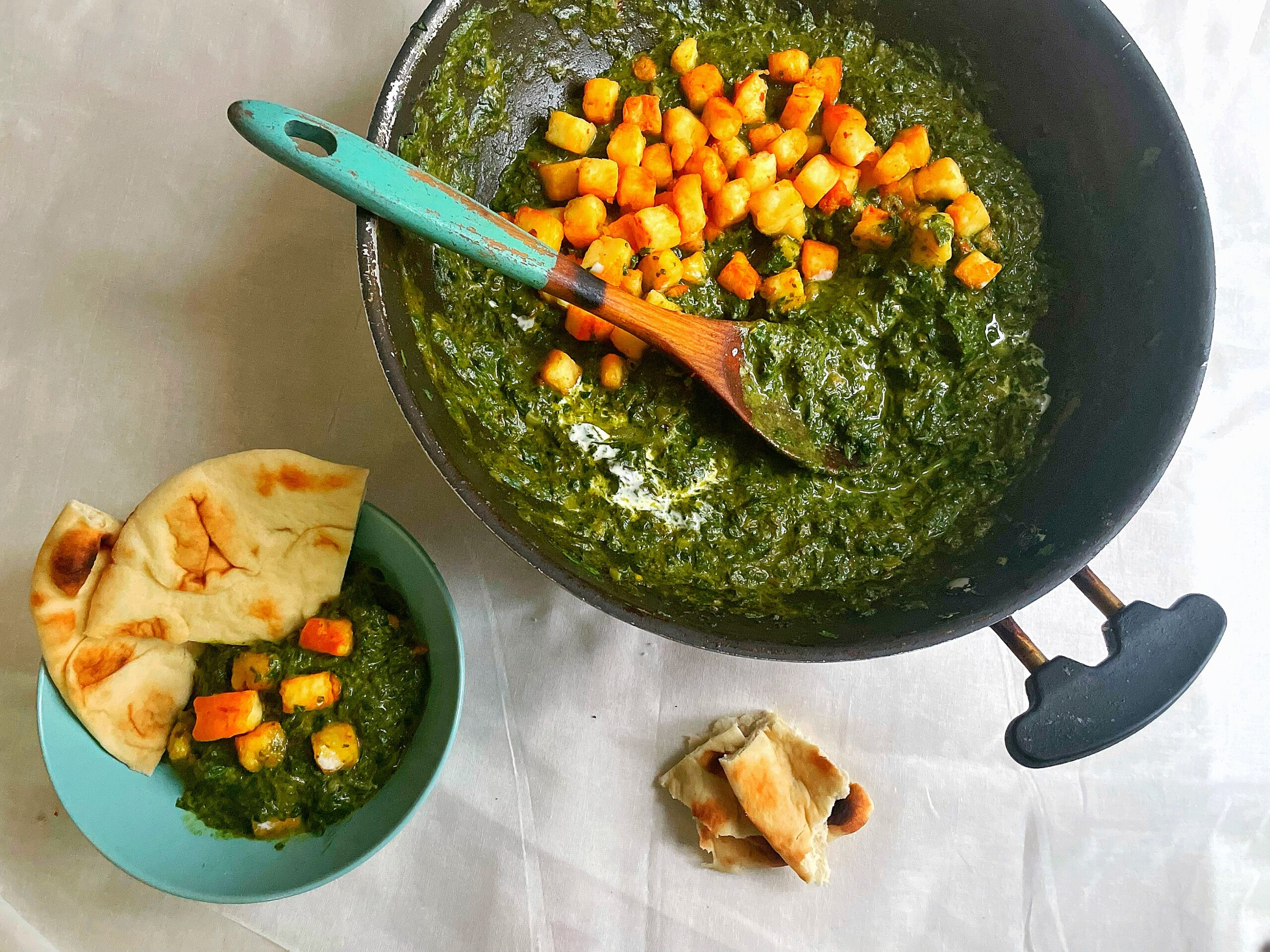 Whats the difference between Saag Paneer and Palak Paneer?

In Palak Paneer, only spinach is used. In Saag Paneer, you are open to using a variety of different leafy greens such as mustard leaves, fenugreek and spinach too. I’ve left the option for you to choose a mix of leafy greens in the recipe card. This particular time, I actually just used spinach due to what I could access at the time. Hey, it’s difficult getting hold of other fresh leafy greens! Having said that, I wouldn’t shy away from using them in this recipe if I could.

I have an old Palak Paneer recipe on the blog here, but the pictures are very outdated and in need of some tlc! The recipe is very similar to the recipe I’m sharing today.

I adore making Saag Paneer as a relatively easy meal – I find it’s so quick and simple, relying on very few ingredients by Indian/Pakistani cooking standards. All you need is:

What Paneer should I use for Saag Paneer? A block or pre-cubed?

Paneer comes in two forms in the supermarkets – either a as a large block or pre-cubed.

The block requires you to cube the paneer at home yourself (obviously). This does add a bit of time to the task, but I find the block paneer tends to a lot firmer and doesn’t release annoying crumbs when frying. You also have control over the side of the paneer cubes – so you can make them as small or big as you like.

The pre-cubed paneer holds the obvious advantage of requiring no cubing. HOWEVER, a word of warning – I find the firmness of this sort of paneer very lacklustre. Here I’ve taken a picture of the paneer I purchased for this recipe

I purchased this because – hello, so convenient! BUT, when I opened the packet, I was taken aback at how the cubes were. I present, specimen A…

Can you see the problem? It’s all stuck together. I had to manually separate most of these cubes and a lot of them ended up breaking or becoming an odd, not cubed shape. It took me perhaps just about slightly less time than chopping the paneer would have.

So bearing all this in mind, it’s up to you whether you prefer convenience over looks! I will always side with the block of paneer.

Making Paneer from scratch… worth the effort?

So, this is actually an option too!

Paneer is actually cheese made from curdled milk. It’s incredibly easy to make – all you need is some milk, vinegar or lemon and a cheesecloth! I won’t go into the full details of how to make Paneer from scratch on this blog post just because I definitely do not have the time on my hands to do those sorts of culinary wonders anymore!

Personally, I prefer purchasing the ready made stuff since it’s so readily available. If it isn’t readily available for you or if you’re so inclined, making it at home is wonderfully easy and cheaper too! In a past life, I used to do it too!

So is it worth the effort? If you don’t have the time or energy, no. But if you do, then it’s definitely worth trying at least once!

How do you make Saag Paneer?

Saag Paneer is a relatively easy meal to prepare and doesn’t take any excessive  skill. I would describe it as a beginner/intermediate level dish.

How do you serve Saag Paneer?

Saag Paneer is generally served with either rice or naan. It’s a personal preference how you like it. I am definitely on team naan!

Saag Paneer is also great eaten on it’s own! I have done so in the past when on a low-carb diet and it was a very welcome meal!

For pictures of the recipe step-by-step, please refer to the blog post